Blepharoplasty is the name given to surgery of the eyelids. When performed on the upper eyelid of a patient with an Asian or epicanthal eye fold, this involves creation of a new lid fold or redefinition of an existing one. Its purpose is to remove any overhanging skin that may interfere with vision, to correct the associated in-turning of eyelashes when present, and to reduce heaviness in the upper lids associated with excessive skin, and heavy accumulations and herniation of orbital fat.

In the process of eliminating excess skin, in-turned lashes, and general lid heaviness, it is possible to modify the lid fold so as to enhance natural Asian beauty and charm. In no way is the operation intended to Westernize the eyes. Many Asian lids naturally possess a fold. In others, the fold must be surgically created or modified so that the resulting lid anatomy is neat and precise.

Occasionally, lid surgery alone is inadequate to solve the problems of the “heavy lidded” person, and it may be necessary to elevate the eyebrow to effect a complete correction. It is not uncommon among Asians to find there is a need for continual eyebrow raising in order to have normal forward vision. Such a condition can cause constant headaches and fatigue, but can oftentimes be markedly improved by the “double eye” operation. 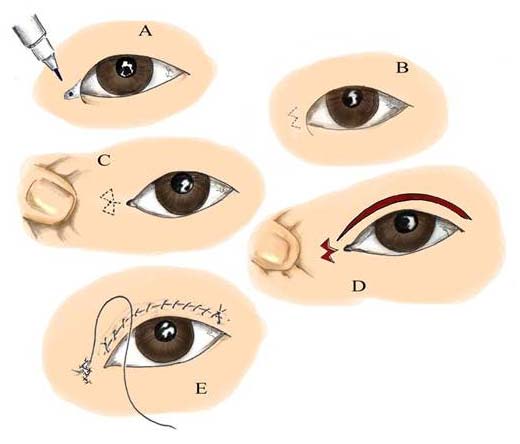 The surgery may be performed on anyone age 11 or above, provided the individual is fairly mature. In exceptional instances, it may be done at an earlier age.

The surgery consists of removing small amounts of skin, a little muscle (usually), and appropriate fat from the eyelids. The skin is then attached to the ligaments of the eye-opening muscle, and often to the eyelid cartilage, creating a crease which is designed to remain permanent.

The size of the fold or the distance between the lashes and the crease may vary. In most cases, a medium sized fold is advisable. However, size should be adjusted in relationship to the distance between eyelashes and eyebrow with the eye open. Usually an attempt is made to begin the crease slightly above the canopy at the inner corner of the eye (the outside position). However, in some lids, this is not possible without performing an additional procedure called Medial Epicanthoplasty at the inside corner of the eye.

Dr. Ceydeli trained with Dr. Flowers, a leading teacher of East Asian eyelid surgery for over thirty years and widely honored in many East Asian countries for his expertise. Asian eyelid surgery at our Clinic is different, because Dr. Ceydeli emphasizes beautification of the East Asian eye, rather than Westernization – which is rarely the desire of those requesting this surgery. We do however recognize that ethnic integrity can remain intact while still moving in the direction of international standards of beauty.

This procedure is best performed at the same time as the original lid operation. Its purpose is to soften the very heavy epicanthal fold (the canopy) at the inner corner of the eye. This medial epicanthoplasty may also be recommended to improve the shape of the eye, and to eliminate an illusion of the eyes being too far apart. The operation places a small zigzag scar just at the inside corner of the eye, which normally become inconspicuous with the passage of time.

In some lids, the distance between lashes and lid crease is too generous due to eyebrow drooping from scalp and forehead relaxation. In these instances, it may be advisable to do a forehead lift to raise the position of the eyebrows. This is normally accomplished through a coronal incision across the top of the head. When this approach is used, it is often possible to reduce or eliminate troublesome frown lines. This coronal lift involves considerable additional time and increases the complexity of the surgery. It may, however, be necessary or advisable to achieve the desired effect on the eyelids, especially in older patients.

Lateral Widening of the Eye Aperture

Very small eyes, and especially those with a lateral epicanthus, or webbing at the outside corner, often benefit from plastic repair of that area, increasing the distance between the inner and outer angles of the eye.

Oftentimes the lid region can be significantly improved in appearance by operating on the lower eyelid. This may be directed towards correcting one of several conditions, the most common being bulging fat, excessive or droopy skin, and thickened muscle.

Too aggressive an attempt to tighten the lower lid may result in lower lid droop, unattractively lowering the lid posture and exposing more eye white than is desirable. This is an infrequent, but well known complication of lower lid blepharoplasty. It is also possible for the lid to pull away from the eye globe. These complications generally result from over aggressive removal of skin and/or muscle, and seem to have been eliminated by Dr. Ceydeli’s cautious approach.

Occasionally a “lazy eye,” which fails to open completely, may be present on one or both sides. If so, an attempt can be made to correct this condition at the same time. Such additional efforts will be discussed in advance of surgery.

Occasionally, there may be intense sagging of the outer corner of the eyelid. This eliminates the normal attractive tilt from medial to lateral corners of the eye. There are several operations available to increase the tilt of the eye. These are referred to as lateral canthoplasty or canthopexy methods. It is possible to achieve spectacular results from this operation.

A new technique that is attracting great interest is eyelash transplantation. A strip of skin is removed from the scalp, individual lashes are harvested, and then transplanted to the eyelid margin. It should be appreciated that these “new lashes” have the characteristics of scalp hair, and must be occasionally trimmed, since they continue to grow.

A very flat bridge of the nose can contribute to heavy epicanthal folds. When appropriate, building up such a flat nose can improve the heavy “canopy” at the inside corner of the eye without requiring epicanthoplasty. Dr. Ceydeli may suggest this possible approach, or you may inquire about it if you are interested. This involves placing bone or other material (usually a solid piece of silicone, which does not migrate to other places) on the bridge of the nose beneath the skin.